Fact or Fake: The DC Area has both a Fall Market & a Spring Real Estate Market

Unfortunately for many consumers, there’s a misperception that there’s a fall market and a spring market in the Washington DC region. Frankly, this is a myth promulgated by the media and some real estate agents, including me for many years. But I studied 31 years of real estate markets and with only two exceptions in late stage bull markets, there is not a fall market of notable value.

There is in fact ONE strong market every year and it happens to be in the springtime, which begins earlier than most realize. Beginning in the middle of February and continuing until the 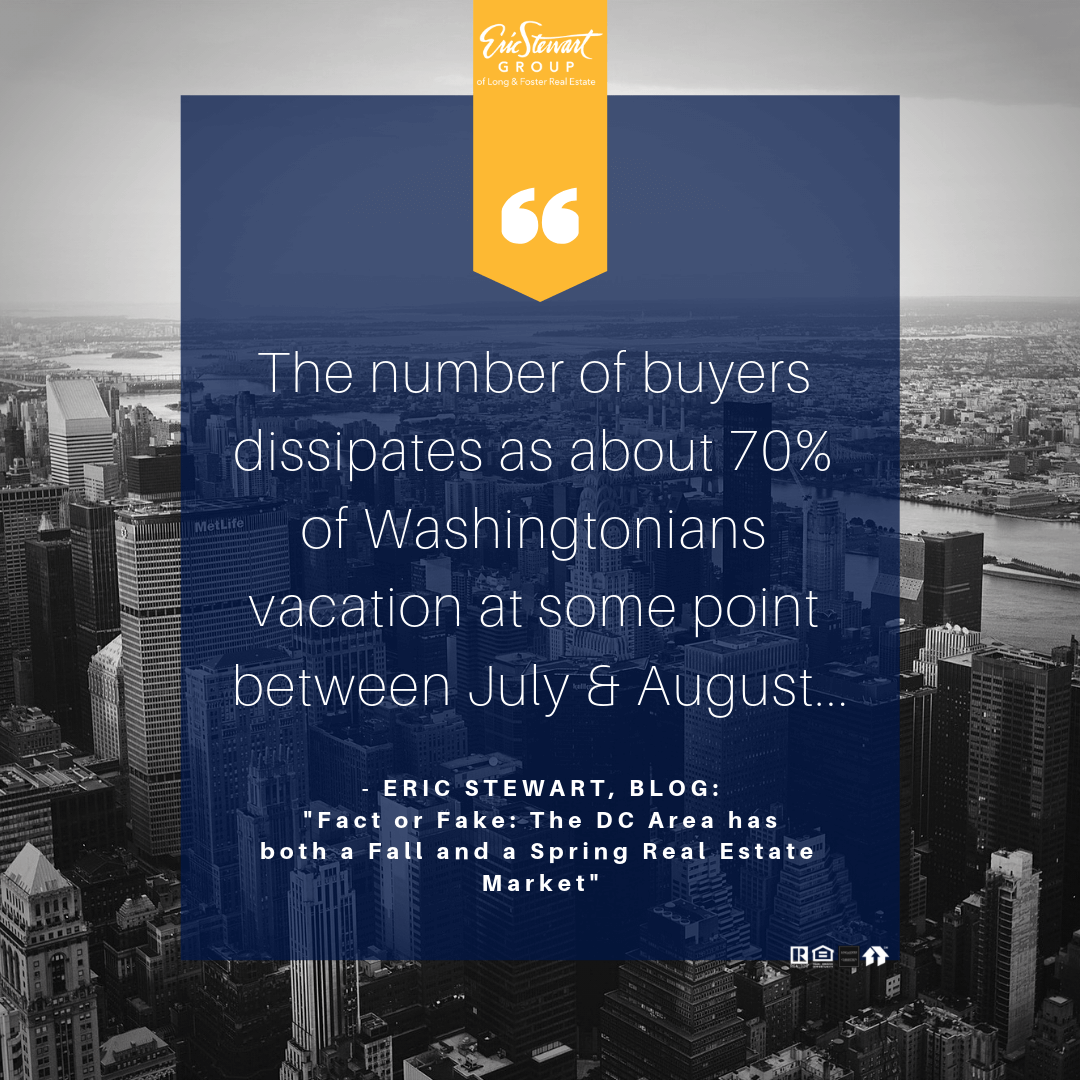 middle-to-end of May, there’s greater demand than supply every single year. At the end of that window, especially as we head into the Fourth of July, we have a saying in real estate – “When the fireworks go up, the sales come down.” Truly, that’s what occurs.

Inventory remains fairly flat through July and August, but the number of buyers also dissipates as about 70% of Washingtonians vacation at some point in that two-month period. It seems logical that after Labor Day everyone would return from vacation and a new group of buyers would emerge, but although buyer activity increases slightly, the number of listings on the market jumps to an all-time high every year in September/October/November before dropping off sharply as we head into the holidays. As a result, prices typically continue to decline throughout autumn and the end of the year.

If you look at settlements in December and January (which means that those houses went under contract in October/November/December), you’ll find that median prices were at their lowest point for the year. Simply waiting until the new year, you’ll see an uptick in demand, better pricing, and a faster sale.

It may surprise you that timing even trumps condition. Basic improvements like decluttering and improving the horizontal and vertical spaces of your property are a good idea and will produce a solid rate of return, but if you focus so much on preparing for the market that you end up entering into it too late, all of the preparation will be for naught.

I have a past client who inherited his father’s house. To honor his father, he decided to spruce up the property before selling it and make the improvements his dad never did. He refinished the hardwood floors, painted the interior, landscaped the exterior, and upgraded the kitchen and bathrooms. It took him until the end of May to complete the work. Had he simply put the property on the market in February/March/April in just cleaned-up, decluttered condition, which would have only taken a few weeks, he would have netted the same amount without the inconvenience of all the upgrades.

Although you can sell your house any time of the year, I think we all would prefer to sell for the most money. Agreed?  Let me know your comments below!

If you have any questions about the market, you can reach me at 800-900-9104 or AOC@EricStewartGroup.com.